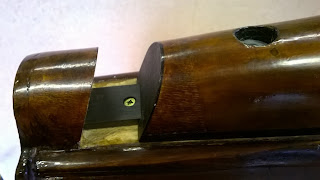 Bass players who frequently travel long distances face many challenges. If you are lucky, you'll have an experienced orchestra management behind you to take care of the logistics; you arrive at rehearsal and your own bass is waiting for you requiring nothing more than a little extra tuning. Travelling independently to gigs is a whole other story. Can you afford that extra seat? Or should you use a hard flight case? Sure this will keep the bass safe but then there's organising special transport to and from the airport. Hiring or borrowing an instrument is another option but what a lottery that can be.

For many players the best compromise is a collapsible travel bass that can go in the hold as a normal piece of luggage. There are a number of these available and some very clever designs. Which alternative works best for the player is a very individual thing. However, sometimes you have a bass that may not be especially valuable, but it works really well for you, it's easily playable, has a good and reliable sound and you just like playing it much more than any of the folding basses that you've tried. Converting such a bass into a travel instrument may then be an option worth looking into.

I recently did such an operation. Neck repairs, especially when the the foot of the neck has cracked always present a challenge. The amount of pressure from the strings is enormous. When I need to replace a neck I will saw it off and then chip out the wood from the joint rather than risk damage when forcing it out. In this case I first removed the fingerboard and then sawed the neck at an acute angle near the button and then along the bottom, where the neck meets the body. Two problems arise from this. Firstly some wood is always lost when sawing so that needs to be replaced. Secondly the now much thinner neck foot is vulnerable to cracking along the vertical grain lines. The way I rectified this was to line the foot with ebony which solved both these issues but also presented the possibility of creating a mortise joint which would ensure accurate placement  of the neck. 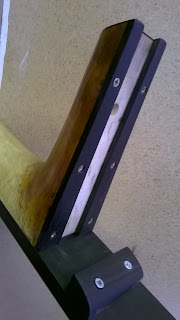 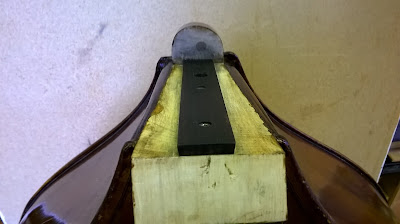 Making a snugly fitting joint here worked fine, but it made actually removing and replacing the neck tricky. So a compromise had to be made. I wanted the joint to glide in and out easily but then also to be very firm once in place. My aim was for the neck to feel as solid as it was before the operation only because of the strength and accuracy of the joint and not by relying on pressure from the strings. This so that the instrument can be moved around and worked on without strings as easily as an instrument with a solid neck. I eased the tightness of the mortise joint and lubricated the surfaces with graphite (pencil lead). This now meant that while the neck moved nice and easily, once it was in place there was a slight side to side movement in the joint. I was able to eliminate this by fitting a piece of ebony snugly underneath the bottom of the neck. 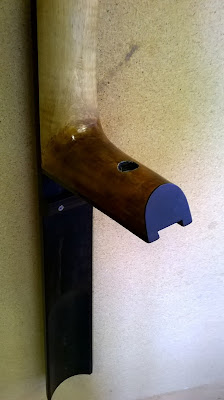 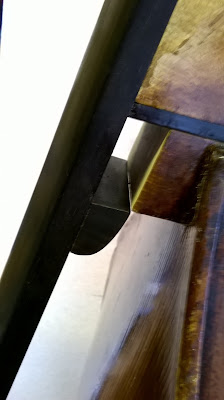 Finally a single bolt holds the neck in place. 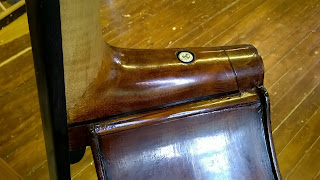