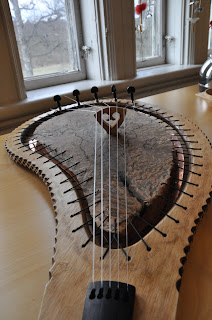 This year they are celebrating 100 years of Hemslöjd, the special kind of Swedish craft work that is much a part of the culture here. There will be an exhibition this summer of 2 000 of these leaves made by people from all over the country, mounted on 100 trees at Liljevalchs art gallery in Stockholm. You can read more about it here: http://hemslojden100ar.se/utstallningar/liljevalchs/

The idea was that the leaves shall show something personal and meaningful from each creator. I've had a little look at some of the other contributions and there is an amazing amount of variety and creativity. Yesterday I finished my leaf and handed it in to the craft consultants who work in the same building. They were finishing up with a big meeting and asked me to talk to everyone there about the ideas behind my leaf. When I was finished they said they wished they had recorded it, hmmm, I said - well I'll have to write it down then. So I did. Here are pictures and the little descriptive text I made, its a kind of poem, in Swedish. 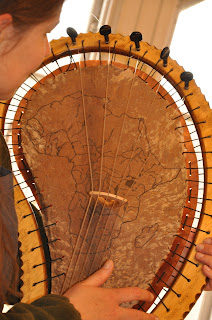 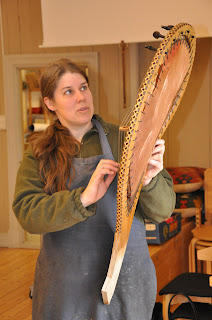 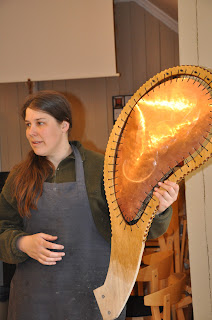 The plywood has many layers, it has depth. The wood represents Africa’s flora. The copper plate probably comes from Zambia originally and it symbolizes the earth, Africa’s mineral riches.  Copper was used as currency there in the past. In some traditions metal used in a musical instrument also symbolizes magic. The front is made from goat skin from Senegal, which stands for Africa’s animal life. Round the edge are blood diamonds and gold. The strings are left over from when I made a Kora (west African stringed instrument), and are attached with violin pegs. The tail piece is made from an old fingerboard, African ebony, you can still see the marks from the strings from when it was played. The bridge is cut from a double bass bridge that I made for an instrument in the Gothenburg Symphony Orchestra, and later replaced.
The pictures don't show the details so well, one needs to have a closer look. The front has a map of Africa with its waters. In the poem I said don't forget the underground rivers, the spiritual connections to the ancestors and the holy places. Around the edge I scratched in the names of the 54 countries, an external concept, borders drawn out by the colonists. The cord, a closed circle, weaving in and out holds everything together. It represents the outward movement of people from Africa during the mankind's early development, during the slave trade and now the great Zimbabwean exodus of which I am a part. It also represents the movement of european/ arab slave traders, the colonists and the multinational companies. It is as if at some level they remember where they originally came from and they return to demand their inheritance, to take Africa's riches. This is what the edgework represents - diamond shapes, surrounded by gold, filled with blood. Over the hide, strings are stretched. It is like music creates a bridge over the continent between all the people of the world, the rhythms of  jazz, blues, rock and roll, hip hop etc, which came originally from Africa and have spread over the world joining people together. Now we can see the positive, the millions of Africans in the diaspora who pour back wealth to their countries and their families who remained behind. There are also millions of others who feel this inexplicable pull, who feel drawn to Africa and drawn to help and heal. So the flow is back and forth. On the back, on the copper, there is the form of a foetus, made with sandpaper. It represents the idea of Africa as the womb of mankind, we all come from there originally. It also represents new life, new hope, Renaissance. And the way in which the metal reflects the light through the skin, Africa's Enlightenment.
Posted by learn mbira at 20:06 No comments: