On Kora Making and Violin Making 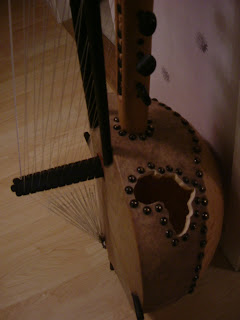 So I finished stringing up my kora over the Christmas break. It was maybe the hardest part and involved some several spectacular explosions and entanglements as tailwires snapped and the bridge collapsed, but after experimenting with stronger materials and about a week of constant retuning it's now playable and the tone is developing nicely. I thought I'd try and do a little recording but neither the mike I have nor my playing does anything approaching justice to the sound.

But I'm very pleased. Two months ago my awareness of the kora as an instrument was of a vague west african bewilderment of strings. Then on 2 november I discovered the music and was hooked. I listened and listened and researched and found that there was a place in England which sold kora kits and I thought rather sensibly that that would be the way to start, with something semi-fabricated in west Africa. So I wrote off to them, right away regretting it slightly, because I really wanted to make one that was really my own, from scratch, truth be told. As it turned out they were busy with Senegal-trips so I was free to do my thing, in fact I felt that I now had the liscence. On 2 december I visited a little shop in Gothenburg and bought the calabash and hide. And now on 2 january the instrument is finished and tuned, quite amazingly as it was along side other work I was busy with. My first violin took me a whole year to make. So what's the deal with violin making vs kora making? Is the kora just simple and "primitive" in comparison with the more sophisticated violin? Ooo that grates me. I may have developed an allergy toward the negative associations of the word primitive.

The kora originated according to oral history about 700 years ago amongst the Mandé people in the Empire of Mali. It's older than the violin. It is built of 4 elements: the gourd representing earth; wood representing plants; skin representing animals and iron representing magic. Some instruments are inscribed with magical qu'ranic symbols on the inside. How exciting is that! Traditionally played by members of Jali (griot) families it's common that the musicians make their instruments themselves. In some families the kids start by making their own kora, then they learn how to play and only when they are quite proficient is an instrument made for them by reputed maker. In the violin world, making and playing have been two quite separate things, which is rather sad in a way.

So if I'm to learn to play the kora, making my own instrument first is really the ideal beginning. I wasn't born into the right family, but all the necessary knowledge was there in my education and experience and on the internet. Cool.

What impresses me about the kora is the simplicity yet perfection of the design, the perfect suitablity of the materials (gourd and hide), the natural ease of contruction. There is another kind of perfection in a violin, the culmination of rennaissance sophistication that become a classic form, which despite the advances of technology remains largely unchanged today. One could argue that the violin is a representation of man's triumph over the forces of nature. Think of the extravagent environments in which it was first played.The form is a sophisticated geometric construction, not found in nature but in the mind of man. The materials submit to the will of the maker and are formed through his tools into the preordained result. Unfortunately it this becomes a kind of tyranny when you consider the way violins are mass produced today. The trees are mowed down and the barely seasoned wood is machined to the exact same measurements used by Stradivari, unaware that in the process something vital is lost. Nature is violated, the instruments just don't sound the way they should and it all ends up becoming some sorry sacrifice to the gods of consumerism.

The kora comes from what today is one of the poorest places in the world, once the centre of the slave trade, though it too was played in the courts of kings. But the kora's form comes not from the cerebral heights of man's conquest over nature, but from thousands of years of interplay between man and nature: from the cultivation of the calabashes; the domestication of livestock; the rending of iron from stone. A dialogue  between man and nature rather than a dominion. It is nature that determines the form of the sound body, not Euclidian geometry. (The geometry behind the violin form is by the way really interesting, although it is a part that is often skipped) The round gourd is simple yet amazingly strong and thicker at the points it needs to be. We would have trouble building anything like it out of wood, a fibreglass mould maybe, but then the dialogue would be silenced. Hide also has inimitable qualities. The natural materials tell a unique story of the life they once contained, a life nutured in the balanced interplay between mankind and nature.

I do not mean to say that either kora making or violinmaking is superior. As with violinmaking, there is also a risk that tourism creates an unhealthy demand for cheap replicas of koras, which will provide money in the pockets of some people but an imbalance in nature. My point is that instrument making is based on traditions, whether they be of cerebrally dominated rational learning from the courts of enlightened europe or of the undocumented mystical interplay of man and his surroundings from the courts darkest africa, but it is also a dynamic and living craft. If one dismisses kora making as something primitive, one loses an important lesson: that good instrument making involves communication, a balance, a dance between the maker, his tools, the materials and nature itself. Of course this is something that the great violin makers of the past and today do instintively.That kora making is "simpler" than violin making to my mind is just a bonus as it allows more accessiblity. I believe that music should not be elitist and the making of an instrument needs not be a mystery to the player.
Posted by learn mbira at 23:32 No comments: