﻿Today I mixed some new varnish, Apothecary style on a real old balance scale, with the traditional resins and gums. On the left scale you can see benzoe and mastix and on the right, sandarac. I'd already measured the shellac into the large glass jar which is flanked by gum elemi on the left and venetian turpentine. Behind is a 5l container of spirits, 99.7% ethanol to be exact. 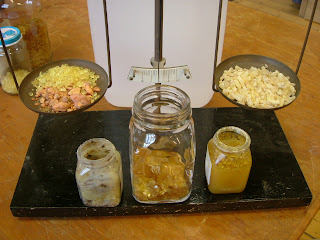 Benzoe: is a balsamic resin which comes from one of several species of Styrax trees. It has the most wonderful smell, which is why I like to use it. So not surprsingly it is also used to make incense, and as a fixative in perfumery.

Mastix: comes from the sap of the tree pistacia lentiscus. As well as being one of the finer resins to use for violin varnish it is used as a culinary spice in Greece and Turkey, especially for sweets and desserts and is also a kind of natural chewing gum. Probably the best thing is to pick the resin drops straight off the tree, if you're going to use it as chewing gum, because I find that it tends to crumble in the mouth and then stick stickily on the teeth, but it has a lovely flavour and apparently soothes the stomach, absorbs cholesterol and reduces bacterial plaque (by 41,5% according to one study).

Sandarac: is a resin from North African tetraclinis articulata. It is one of the most important ingredients in varnish but also used as incense, a remedy for diarrhea, and calligraphers like to grind it up and sprinkle it on their parchments.

Shellac: is a resin which doesn't come directly from a tree, but via the alimentary canal of the female lac bug kerria lacca. The rather pale shellac that I use (there are many different colours) probably comes from the tree schleichera trijuga. It's fairly common knowledge that shellac is used as a varnish and as an ingredient in a french polish, but it is also known as food additive number E904 and used to replace the natural wax removed from apples during the cleaning process! It is also a low temperature fuel which allows for the creation of pures greens and blues in fireworks.

Gum elemi: This is a fragrant sticky mess which comes from the tree canarium luzonicum. It can been used to treat coughs and brochitis and in Arabic it means "as above, so below" suggesting that it works on the emotional and spiritual planes as well.

Venetian turpentine: is a variety of turpentine that comes from the Western Larch or larix occidentalis. Ordinary modern turpentine is a horrid stinky liquid used for cleaning brushes and things, but it has traditionally been used in medicine to treat wounds, lice and intestinal parasites and is still used as an ingredient in Vicks chest rub. 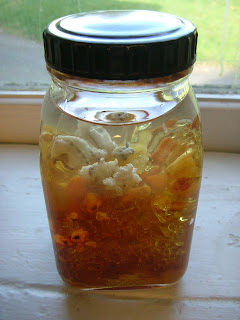 Very pretty when the jar is filled with alcohol and put in the window, though not for long as they all start to mix and dissolve and murkify. I'll stir it now and then and when I'm happy, filter it through an unbleached coffee filter to remove the insoluble bits.

So you want to know the secret of my varnish? The secret is that there is no secret. It's my own concoction based largely on what we used at school and I'm quite happy with the way it works. Here is the recipe:

Raising the saddle on a double bass to lessen the string angle. 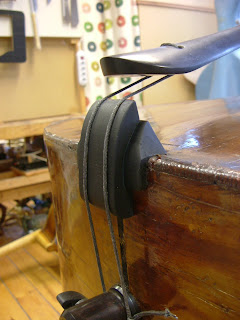 A problem that you sometimes get with basses is that the angle of the strings at the bridge is too acute. This is idiosyncratic to the way the instrument, in particular the neck setting, has been constructed. The steeper the angle of the strings at the bridge, the more downwards pressure is exerted on the table. This can affect the tone and may result in a bigger, brighter sound which could be desirable, but it can also cause problems if the table is old, thin and/or pressure sensitive. One may also be looking for a warmer, more open response for orchestra playing.
The solution to this problem, if it is a problem, is to raise the height of the bottom saddle. There are a variety of ways to do this and many players are now looking for an adjustable saddle raiser which allows them flexibilty, for them to have more control over the instrument's sound. I have just had a bass in for that job and came up with the solution pictured above. I am quite pleased with the result: a simple, what they might call here in Sweden "funkis", design. It is made from an old piece of fingerboard, fitted exactly to the existing saddle, which has two invisible screws holding it in place. It sits loosely and may easily be removed should the player wish to return to the original setting. The pressure from the string tension here is quite enormous which means careful attention to the fitting and form of the saddle is essential. The laws of physics and mechanics (vectors) must be taken into consideration. The tailwire is made of a very strong, non-elastic cord, tied with a simple knot which can also be easily adjusted. This will be necessary when switching between the different saddles.
Here you can see the adjusted string angles which sit nicely and evenly over the bridge.